That was the reaction of most people I spoke before I travelled to Wales a month ago and for me it was also a self discovery tour of what Wales offers in the food arena. It all started about a year ago. I met in one of the food fairs in London the lovely couple Nick and Kitty and talking about chocolate they told me about the Taste Trail, which I decided to try. 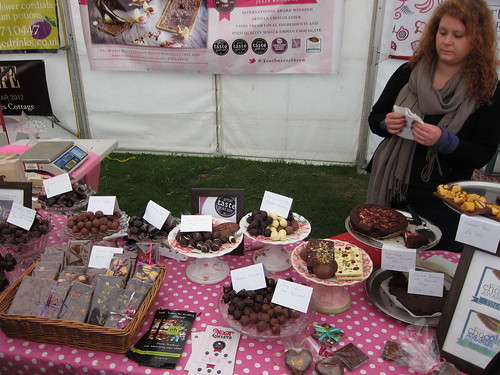 I packed a small bag on a mild mid week morning and together with a friend headed north west. The drive in England is on motorways, but when we reached Shrewsbury (still in England) which was our first stop, the roads become narrower and quite often we were stuck behind a slow truck. Shrewsbury is very pleasent and walking on the high street toward the castle we discovered the first chocolate shop of this journey The Chocolate Gourmet. They stock some good quality chocolate bars, but the truffles are all imported from Belgium as I expected to find some local chocolate. The best option if you want to try local chocolate is to head to the market where Julia from Toot Sweets Chocolate sell her stuff. I tried her awesome chocolate in Ludlow Food Festival a few months earlier. 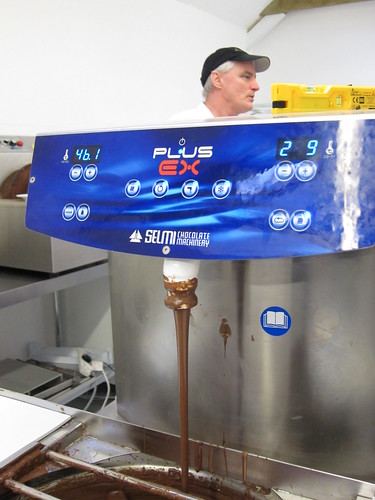 Leaving England behind and entering the unknown territory of Wales. Even if you miss the sign Welcome to Wales you noticed straight away on the narrow roads the Slow writing on the road is replaced by the Welsh equivalent of Araf. It took us another couple of hours to get to our first chocolate stop in Wales. Visiting Nick and Kitty from Chocolate Fusion. The weeks before our visit brought a lot of rainfall to Britain, which caused to the roads to be flooded. I set my SatNav App to the given postcode and had the instruction was given by Kitty, but due to the storms the sign fell off and only passing by the house the second time we realised we are in the right place, but be aware the mobile signal in this area is quite poor, not talking about 3G, but I'm talking about 2G. 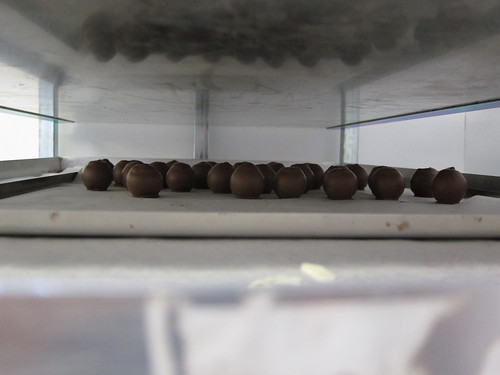 Nick and Kitty bought a farm house in a small village and on the same plot got their workshop. They confer the barn into the existing chocolate factory and told us they work on building a visitor centre. We were welcome into the factory kitchen and been served with the latest truffles they were working on. There were few versions of each truffle experimenting with the flavours. We tasted the Blackcurrent marshmallow coated Ecuadorian chocolate, Chili cinnamon and cardamon and Banana spices rum and caramel. 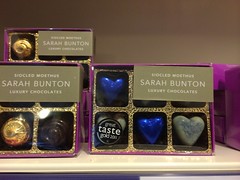 The next chocolate place in our list was Sarah Bunton Chocolate. Situated in Y Caban, Devils Bridge. The home of the Devils Bridge Falls is a couple of minutes by foot and the last stop for the steam train from Aberystwyth. 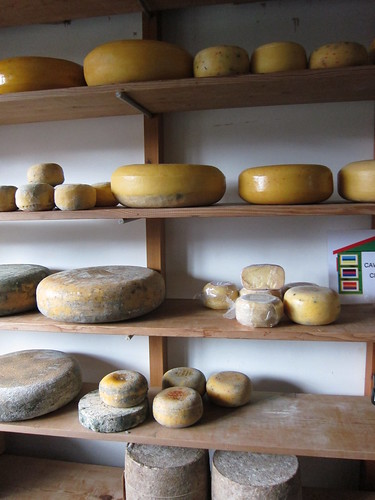 Consuming so much sugar made me crave for some savoury food, so the next 2 stops we visited cheese farms. The first one was Caws Teifi Cheese  that also produce spirits by Dà Mhìle Distillery in the same farm. The second is Caws Cenarth Cheese. Both farms produce tasty cheese. Small selection can be purchased in top delis and department stores in London.

Accommodation
We spent the nights in a lovely B&B by the name Ffynnon Cadno and run by the couple John and Jill. The house is on the A44 road just outside Aberystwyth. This place is highly recommended. Jill works at Y Caban making chocolate she can tell you some secrets about making chocolate. 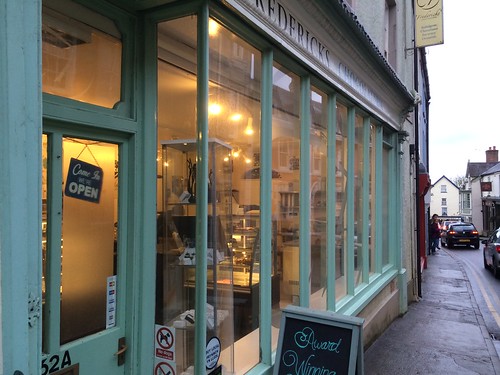 Heading back to London we passed by No 14 Chocolate House in Fishguard, but due to renovation the shop was closed and the last stop was at Fredericks Chocolaterie in Narberth with their delicious truffles. A short drive east of Narberth will bring you back to the motorway.

Another gem I visited another time is the Black Mountain Gold Chocolate in the pretty town of Crickhowell. I haven't been here for over a year, but the town and the chocolate shop worth a detour of the M4.


Now watch the video of the chocolate visit:


and a slide show of the photos from the trip